NEW YORK – After a slight reversal of the 360Dx Index's 2021 downward trend in April, the Index returned to another decline last month as it dropped 4 percent month over month.

Quidel's main news during the month was the announcement that its first quarter revenues more than doubled year over year, likely driving the company's 13 percent share price increase between April and May. Driven by PCR and rapid antigen COVID-19 tests, Quidel's revenues rose 115 percent to $375.3 million, although they missed the analysts' average of $400.8 million. The company also saw demand for its cardiometabolic immunoassay.

However, JP Morgan analyst Tycho Peterson said in a note that he would "continue to remain cautious on the stock, given softening demand trends for COVID testing … a shift in focus to esoteric and OTC markets, the risk of inventory over-build, and lingering questions around the long-term viability of COVID-19 antigen testing as vaccine distribution is scaled."

Meridian Bioscience's 6 percent share-price increase was also likely the result of a positive earnings report in its fiscal second quarter. During the quarter, Meridian's revenues rose 49 percent year over year to $85.3 million, besting the consensus analysts' estimate of $84.5 million.

Quotient Limited's only news in May was its decision to sell $95 million of its 4.75 percent convertible senior notes in a private offering. The company said it will use the proceeds to continue development of its multimodal MosaiQ platform and to prepare for its commercial launch, as well as for general corporate purposes.

Despite multiple pieces of good news, Guardant's share price declined throughout the month. Early in May, the firm reported that its first quarter revenues increased 17 percent year over year to $78.7 million. New data published in Clinical Cancer Research last month also showed Guardant's noninvasive and tissue-agnostic test for minimal residual disease detection in colorectal cancer patients has sensitivity and specificity comparable to competitive products in the field. Toward the end of the month, the US Food and Drug Administration approved the firm's Guardant360 CDx test as a companion diagnostic for Janssen Pharmaceutical's EGFR-MET bispecific antibody amivantamab (Rybrevant) and for Amgen's sotorasib (Lumakras).

At the end of the month, Guardant sued Natera for false advertising, unfair competition, and unlawful trade practices related to alleged "misleading statements" about Guardant's products for minimal residual disease detection. The company alleges that Natera is suggesting to healthcare providers that the Guardant Reveal assay is "inaccurate and/or insensitive" and inferior to Natera's Signatera test. Natera responded by suing Guardant for using false and misleading claims to deceive clinicians about the performance capabilities of its MRD test.

The only news from Veracyte last month was the release of its first quarter revenues, which rose 18 percent year over year to $36.7 million. The company also announced during the report that CEO Bonnie Anderson would step down and be replaced by former Helix CEO Marc Stapley.

In an analyst note, William Blair's Brian Weinstein said the announcement about Anderson "caught us completely by surprise," although he emphasized that he is "not taking the move as an indication about the prospects for the company or as a read on any upcoming results." He added that the switch "does not change our belief in the underlying assets at Veracyte and the foundation that has been built," but noted that "this type of abrupt change does add a bit of risk to the story."

He also said that the firm's shares are under pressure because of "sector rotation," referring to a movement of investments from one industry to another in anticipation of the next phase of the economic cycle, and added the news about Anderson "will likely not do anything to stem the recent slide, especially because investors did not see this coming at all."

Invitae reported that its first quarter revenues increased 61 percent to $103.6 million and exceeded the Wall Street consensus estimate of $101.5 million. The firm also filed a lawsuit against Natera alleging that company infringes on its patented techniques for assembling DNA sequencing reads. 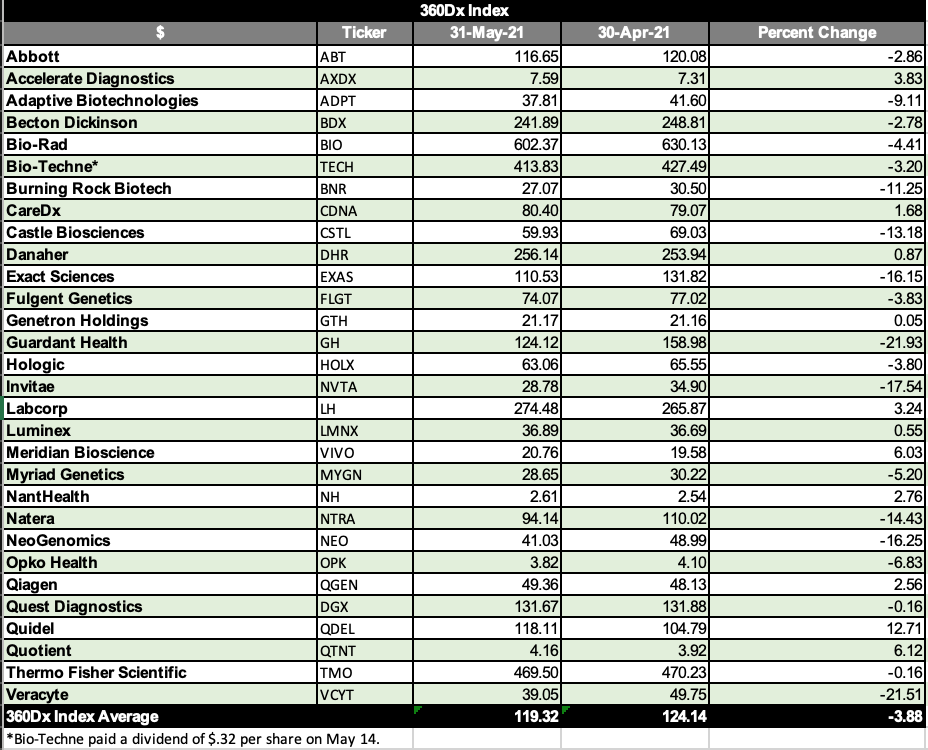