NEW YORK – Although 2021 has so far seen a downward slope in the 360Dx Index, a rise in the share prices of many diagnostic firms in April reversed that trend and drove the Index up nearly 4 percent month over month.

GenMark Diagnostics has been removed from the Index following its acquisition by Roche.

The Index's increase followed the broader markets as the Dow Jones Industrial Average was up nearly 3 percent month over month. The Nasdaq rose 5 percent, while the Nasdaq Biotechnology Index increased 3 percent.

CareDx likely saw its share price increase due to the finalized limited coverage decision from Medicare Administrative Contractor Palmetto GBA for molecular tests to evaluate and manage solid organ transplant patients. After the local coverage determination was announced, CareDx said coverage for its AlloMap and AlloSure heart transplant tests will remain unchanged. Piper Sandler analyst Steven Mah wrote that the LCD "substantially moves up the timing of additional organ types for CareDx," such as liver and lung tests.

The company also presented its RADAR study earlier in the month at the National Kidney Foundation's 2021 Spring Clinical Meetings, which demonstrated AlloSure's clinical utility, according to an analyst note from Craig-Hallum's Alex Nowak.

Luminex's rise resulted from the announcement that Saluggia, Italy-based DiaSorin will acquire the company for $1.8 billion, or $37 per share. Luminex will be merged with a newly formed US subsidiary of DiaSorin and the deal is expected to close in the third quarter. Once the acquisition is complete, DiaSorin said the combined entity will have 2020 revenues of around €1.25 billion ($1.49 billion) and is expected to provide cost synergies of about $55 million within three years of closing.

Burning Rock Biotech benefited last month from an evaluation by a group, led by the US Food and Drug Administration, of the performance of research-use-only liquid biopsy next-generation sequencing tests, including Burning Rock's Lung Plasma V4, to detect mutations in ctDNA at different variant allele frequencies. According to the evaluation, the test was one of the two most sensitive tests among the group.

The firm also announced in late April that it had entered a strategic partnership with Abbisko Therapeutics to develop a companion diagnostic test for the pharmaceutical company's small molecule FGFR inhibitor, ABSK091. The test will be used to detect FGFR genetic alterations in patients with urothelial carcinoma and will help advance clinical research and development of the drug.

Among the decliners, there is no clear reason for Meridian's drop in share price last month, as its only news was the announcement that it had submitted a test for the detection of Campylobacter species to the US FDA for 510(k) clearance. The test runs on Meridian's Curian rapid fluorescent immunoassay instrument and detects Campylobacter species C. jejuni, C. coli, C. upsaliensis, and C. lari in stool samples.

The National Institutes of Health also announced in April a $5.5 million contract for Meridian's single-use, automated RT-PCR test for SARS-CoV-2, but the contract was previously announced by Meridian in February.

Another decliner, NantHealth, also had only one piece of news last month. The firm reached agreements for $137.5 million in new financing that will extend the maturity date of existing debt instruments to 2026. The firm is issuing new senior unsecured convertible notes with a 2026 maturity to existing investors Highbridge Capital Management and Nant Capital. It plans to use the proceeds to retire existing convertible notes due in December and for operating expenses.

Despite its share price decline, Fulgent Genetics had no significant news in April, and the reason for the decline is unclear. 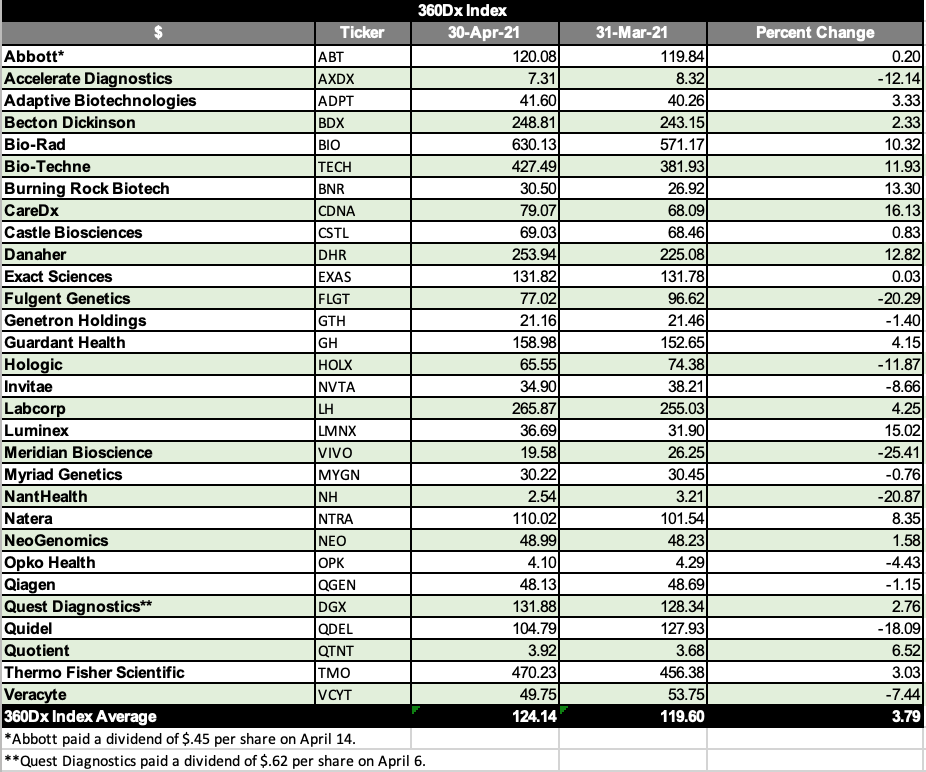